Kinneret Savitsky, Ph.D., CEO of BioLineRx, remarked, “2011 was a very significant year for BioLineRx and we are proud of our achievements in expanding and advancing our therapeutic pipeline. We are now working at near capacity with a robust pipeline of 16 therapeutic products, five of which are in various stages of clinical development.

“Initial results from the ongoing clinical trials for our two leading candidates, BL-1020 and BL-1040, are expected in 2013. BL-1020, for the treatment of schizophrenia, is undergoing the CLARITY Phase 2/3 trial, which assays improvement of cognitive function as its primary endpoint. The CLARITY trial is progressing according to plan, and discussions are being conducted in parallel with potential partners for the further development and commercialization of this product. Regarding BL-1040, for the prevention of pathological cardiac remodeling following a myocardial infarction, our partner Ikaria has commenced the PRESERVATION I trial, a CE Mark registration trial for BL-1040 (also known as “BCM”), as planned, and we look forward to the results.

“We have pushed ahead with the development of our other clinical candidates, including BL-5010 for the non-surgical removal of skin lesions, which has completed a Phase 1/2 clinical trial. In 2011, we received notification from the European regulatory authorities regarding the designation of BL-5010 as a medical device and have completed designing its next clinical study. We are currently evaluating the most advantageous ways to progress with the product from a business perspective. In addition, BL-1021, our neuropathic pain product, was shown to be safe and well tolerated in a Phase 1a clinical trial, and we are now assessing its development plan, including the best indication to focus on to maximize its commercial potential. The most recent addition to our clinical pipeline is BL-7040, for the treatment of Inflammatory Bowel Disease. BL-7040 recently received approval from the Israeli Ministry of Health for a Phase 2 study. We plan to commence the study in the second quarter of this year and expect to publish the results by the end of 2012,” stated Dr. Savitsky.

Dr. Savitsky added, “The strategic decision we undertook nearly two years ago to enter the dynamic and rapidly growing field of Hepatitis C has recently gained serious traction for BioLineRx. In the first quarter of 2012, we in-licensed BL-8020 and BL-8030, two promising orally-available treatments for Hepatitis C, both of which will be developed toward the clinic at an accelerated pace. Other high value therapeutic areas, like Celiac Disease, are also being pursued. Also, in 2012, we plan to evaluate alternative funding arrangements for pre-clinical projects that do not benefit from our special funding arrangement with the Office of the Chief Scientist of Israel’s Ministry of Trade, Industry and Labor.

“In February 2012, BioLineRx completed a $15 million private placement to healthcare-focused U.S. institutional investors. This financing places us on a secure financial footing, with enough capital to implement our development plans over the next two years. The private placement in the U.S. followed the listing of our American Depositary Shares on NASDAQ in mid-2011. We see both these accomplishments as important steps in the development and growth of our company, as we look to establish and expand our presence in the U.S. financial markets, as well as in the global biopharmaceutical industry,” concluded Dr. Savitsky.

Highlights for 2011 and 2012 to Date:
Corporate Highlights 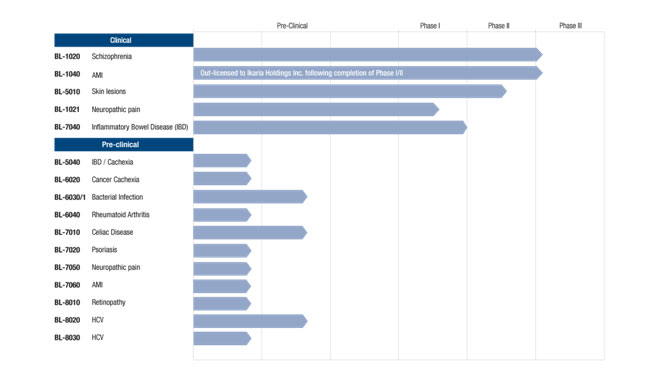 Summary of 2011 Financial Results:
During the year ended December 31, 2011, no revenues were recorded. Revenues in 2010 reflect an upfront payment of $30.0 million received in connection with the out-licensing agreement signed with Cypress Bioscience in 2010 in respect of BL-1020. Cost of revenues in 2010 consisted of payments due to the licensors under the BL-1020 in-licensing agreement.

Sales and marketing expenses for the year ended December 31, 2011 were NIS 3.3 million ($0.9 million), a decrease of NIS 1.3 million ($0.3 million), or 28%, compared to NIS 4.6 million ($1.2 million) for the year ended December 31, 2010. The decrease resulted primarily from a shorter period of time devoted to strategic partnering efforts in connection with BL-1020 during 2011 as compared to 2010, as well as from a reduction in expenses due to the transfer of our business development activities from the U.S. to Israel during the first half of 2011 and the resulting closure of the Company’s U.S. office. Sales and marketing expenses are expected to increase in the foreseeable future, as the Company continues to increase its business development efforts in respect of BL-1020, as well as some of its other clinical stage assets.

BioLineRx Ltd. is a publicly-traded biopharmaceutical development company. It is dedicated to building a portfolio of products for unmet medical needs or with advantages over currently available therapies. BioLineRx’s current portfolio consists of five clinical stage candidates: BL-1020 for schizophrenia has commenced a Phase 2/3 study; BL-1040, for prevention of pathological cardiac remodeling following a myocardial infarction, which has been out-licensed to Ikaria Inc., is currently undergoing a pivotal CE-Mark registration trial; BL-5010 for non-surgical removal of skin lesions has completed a Phase 1/2 study; BL-1021 for neuropathic pain is in Phase 1 development and BL-7040 for treating Inflammatory Bowel Disease (IBD) is commencing Phase 2. In addition, BioLineRx has 11 products in various pre-clinical development stages for a variety of indications, including central nervous system diseases, infectious diseases, cardiovascular and autoimmune diseases.

BioLineRx’s business model is based on acquiring molecules mainly from biotechnological incubators and academic institutions. The Company performs feasibility assessment studies and development through pre-clinical and clinical stages, with partial funding from the Israeli Government’s Office of the Chief Scientist (OCS). The final stage includes partnering with medium and large pharmaceutical companies for advanced clinical development (Phase 3) and commercialization.